Almost 71,000 viewers watched the 131 films in the programme, the live film talks and award ceremonies as well as the DOK.forum and DOK.education events.
The industry platform DOK.forum was also a great success online: 2,417 guests and 221 experts from the international film and media industry took part, and a total of 58 events took place. The film literacy programme DOK.education had a larger online audience than ever before, with over 4,000 viewers nationwide. 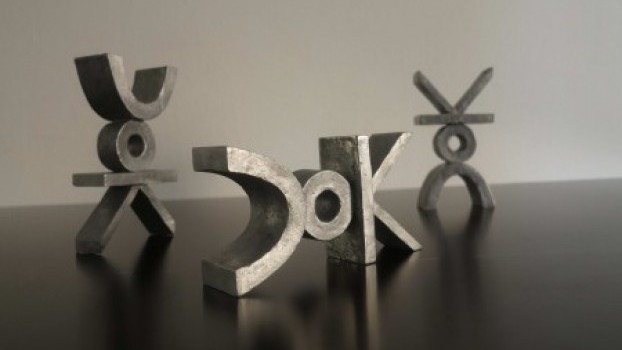 The award winning german documentaries are:

VIKTOR DOK.deutsch goes to ZUHUR'S DAUGHTERS by Laurentia Henske, Robin Humboldt
Jury statement: "They put on make-up, they listen to music, they talk about boys. Samar and Lohan long to have a real life. The right life in the right body. The two sisters are trans. In their home country of Syria, that would have meant certain death. 'f your son or wife does something forbidden and you don't kill them, you have to leave', their father explains. So he fled to Germany with his two wives and four children. Because "who is capable of killing their own child? Your child is part of your soul," he says. Talib and his wife Zuhur do not understand their children, but mostly they worry about them. Filmmakers Laurentia Genske and Robin Humboldt show all this with great empathy. Their film follows and documents in the best sense the transwomen's path to the life they hoped for – with all its hurdles and difficulties. And at the same time it reveals to the audience what it means to be a foreigner, a refugee and a woman."

FFF Talent Award Documentary goes to  STORIES OF DADS | VÄTER UNSER by Sophie Linnenbaum
Jury statement: "With a simple concept, Sophie Linnenbaum succeeds in opening up entire life worlds that burn themselves into the memory. In formal terms, VÄTER UNSER is characterised by a reduced, relaxed and concentrated setting. The outstanding montage opens up life worlds with an enormous range; stories that life writes, told without pathos, with human warmth and dignity. The stories about fathers are funny, sad, shocking, astonishing and touching. Documentary cinema that takes time for its protagonists and tells the often sorrowful and painful, but also beautiful and tender moments between daughters and sons and their fathers through faces and words in such a way that intense images inevitably arise in the mind. This film is an enrichment for all who engage with it."

megaherz Student Award goes to THE CASE YOU by Alison Kuhn
Jury statement: "THE CASE YOU literally shines a spotlight on one of the most pressing issues within our industry today. The film impresses with the precision with which it depicts and accuses abuse of power. It is loud and poignant at the same time and convinced us with its relevance, the courage of the protagonists, but also with its cinematic realisation. The criticism the film makes is not only directed against the power structures within the film industry, but it is aimed at a larger problem inherent in the system. THE CASE YOU is an ode to community cohesion, to 'sisterhood'. We hope to see brave projects like this from our fellow students and filmmakers in general in the future."

VFF Documentary Film Production Award goes to THE OTHER SIDE OF THE RIVER
by Antonia Kilian; Producers: Frank Müller (Doppelplusultra Filmproduktion), Guevara Namer and Antonia Kilian (Pink Shadow Films)
Jury statement: "The director and producer Antonia Kilian lived in northern Syria for a year, gave film workshops for young women there and made short films with them on women's rights. Meanwhile, Frank Müller and his Hamburg-based Doppelplusultra Filmproduktion tried to secure international financing for the film by applying for funding, at workshops, pitching events and co-production meetings. Certainly, this early effort to internationalise the project has left its mark on the dramaturgy of the film. At the same time, however, it reinforces the remarkable production achievement, which involved a great deal of personal commitment, considerable up-front work and an initially high financial risk – and which also has a virtually model character in other respects: People from the crisis region, all with a history of flight, were significantly involved in the project creatively and organisationally and were fairly remunerated in accordance with the problematic production conditions."

Christina Wolf and Daniel Sponsel open the festival from the (empty) Deutsches Theater, with several guests joining in via video. 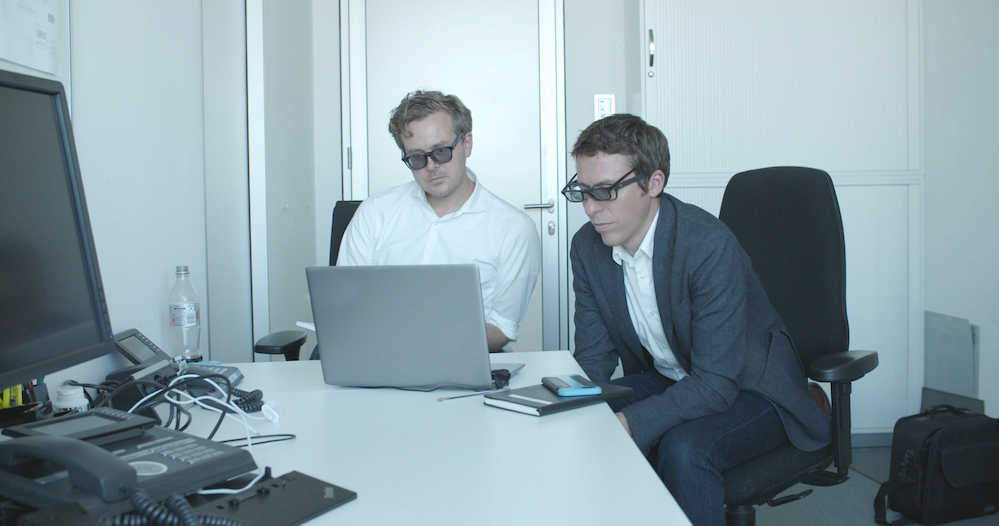 HINTER DEN SCHLAGZEILEN | BEHIND THE HEADLINES by Daniel Andreas Sager, produced by Marc Bauder, bauderfilm and distributed in Germany by RFF - Real Fiction Filmverleih, World Sales by NEW DOCS will be the opening film of the 36 DOK.fest Munich @home.

Daniel Sponsel, CEO of DOK.fest Munich: “We are happy to open the 36th DOK.fest München with BEHIND THE HEADLINES. In this film, everything comes together: a highly relevant topic, strong protagonists and outstanding cinematic craftsmanship. Daniel Sager lets us witness at first hand how European history is being written.”  Director Daniel Sager and the film's protagonists Frederik Obermaier and Bastian Obermayer will talk with presenter Christina Wolf and festival director Daniel Sponsel about the film, its making and the Ibiza affair during the opening ceremony. 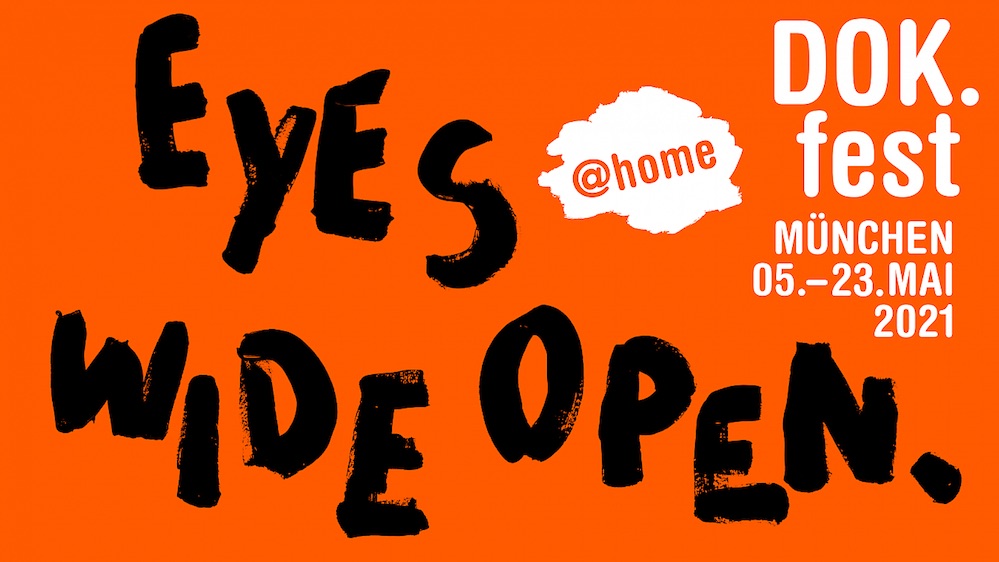 The 36. DOK.fest München, Germany’s biggest documentary film festival, presents its entire programme online. Until most recently, the DOK.fest München team had been preparing for a dual edition, planning to show films both on location in cinemas in Munich as well as online. In light of the current state of the corona pandemic this dual concept is no longer viable. The festival's management has decided to host this year's event, as has been done last year, exclusively online. It will be extended for one week and takes place from 5 – 23 May.

Save the Date: Press conference on 27 April 11 a.m. online at www.dokfest-muenchen.de.

131 films from 43 countries including 38 German productions and coproductions with a selection of the best socially relevant and artistically outstanding documentaries of the year. Browse the programme now!

LineUp of German productions and co-production: 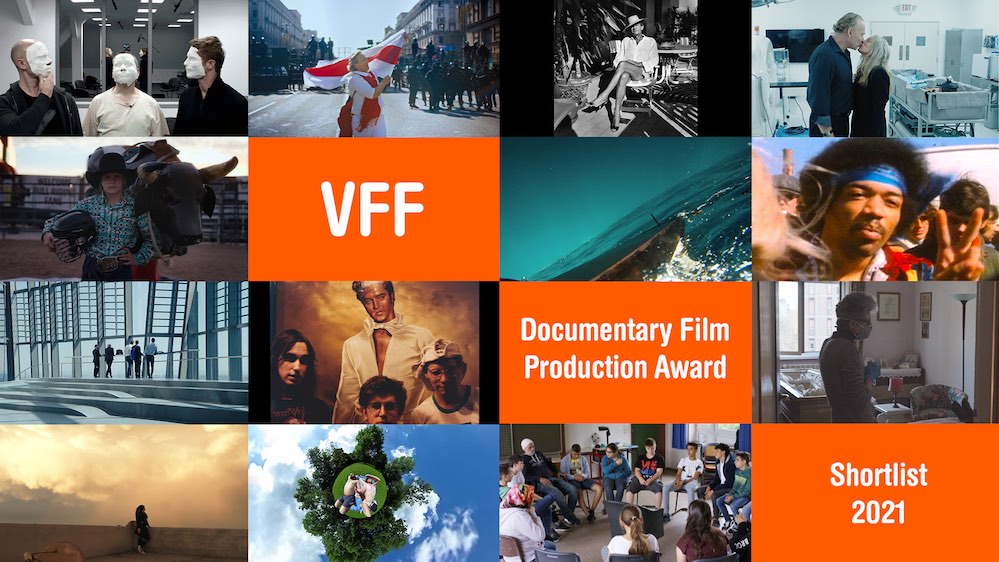 The VFF Documentary Film Production Award is sponsored by the VFF Verwertungsgesellschaft der Film und Fernsehproduzenten mbH. It is endowed with 7,500 euros. Unique in Germany, it focuses on the work of documentary film producers. The award will be awarded for the fourth time in 2021. And as April 16, 2021 announced - the winner are the producers of THE OTHER SIDE OF THE RIVER,  Frank Müller (DOPPELPLUSULTRA Film & TV Produktion), Guevara Namer & Antonia Kilian (Pink Shadow Films). 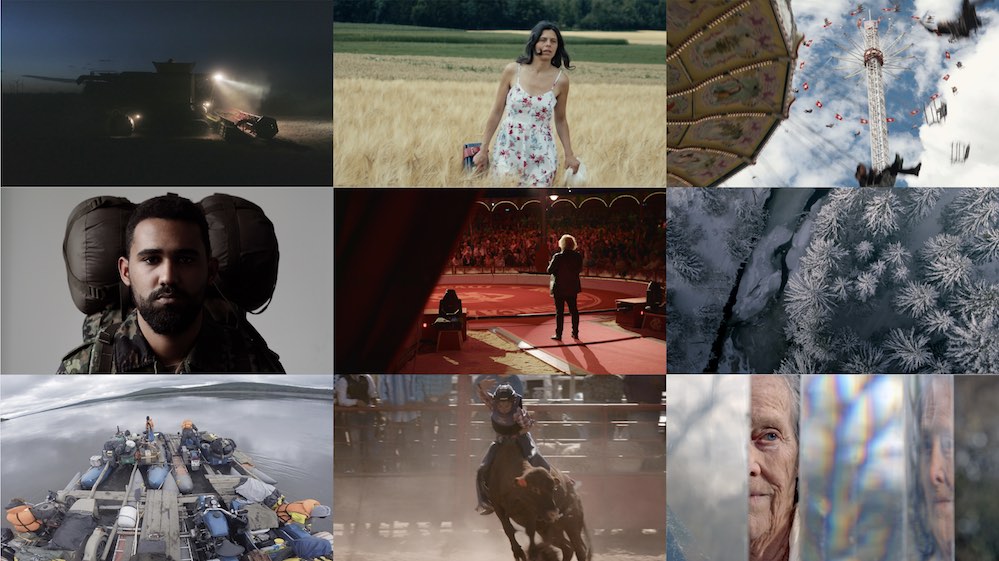 The German Documentary Film Music Award is unique in the German-speaking territories in recognizing the original score for a feature-length documentary and considered as a platform for the work of composers and the value of music as a narrative layer in documentaries. The award is endowed with 5,000 € and is sponsored by the Versicherungskammer Kulturstiftung and goes to the composer of the original score. The award ceremony will take place for the ninth time as part of DOK.fest München.
...and the winner is  Christoph Schauer with his original score for SOLDIERS | SOLDATEN by Christian von Brockhausen, Willem Konrad, produced by NDR/RBB 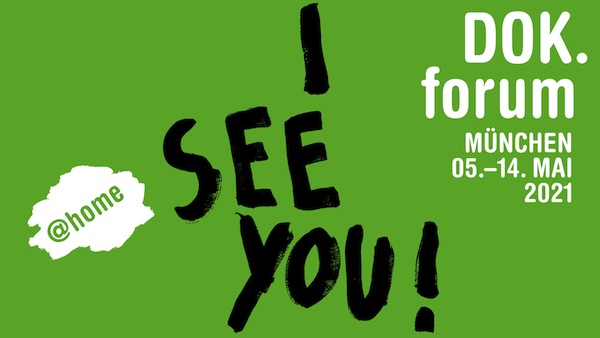 OVERVIEW of all events.

Selected DOK.forum events online ready to stream since May 20, 2021

DOK.forum – The Industry Platform of DOK.fest München
Think tank for the documentary film industry and platform for projects in the development process.

In workshops and other public events, the DOK.forum Perspectives is a platform for the discussion of media-political, technical and narrative trends. With the programme series Re:arranging Reality, it will focus on post-production in documentary film in 2021 and the current media policy from the perspective of developments caused by the pandemic.

As a co-production and ideas market, the DOK.forum Marketplace — May 5-11, 2021 online only — offers various formats for the further development and realisation of 50 new documentary film projects in various stages of development – from the first idea to the rough cut. For the first time, the Master's Pitch will also take place online: Nine selected teams will present their documentary film in the making to an audience and receive valuable feedback. In other formats such as roundtables and screenings, as well as in four competitions with prize money, the project teams meet around 100 experts from production, editing, promotion and distribution. 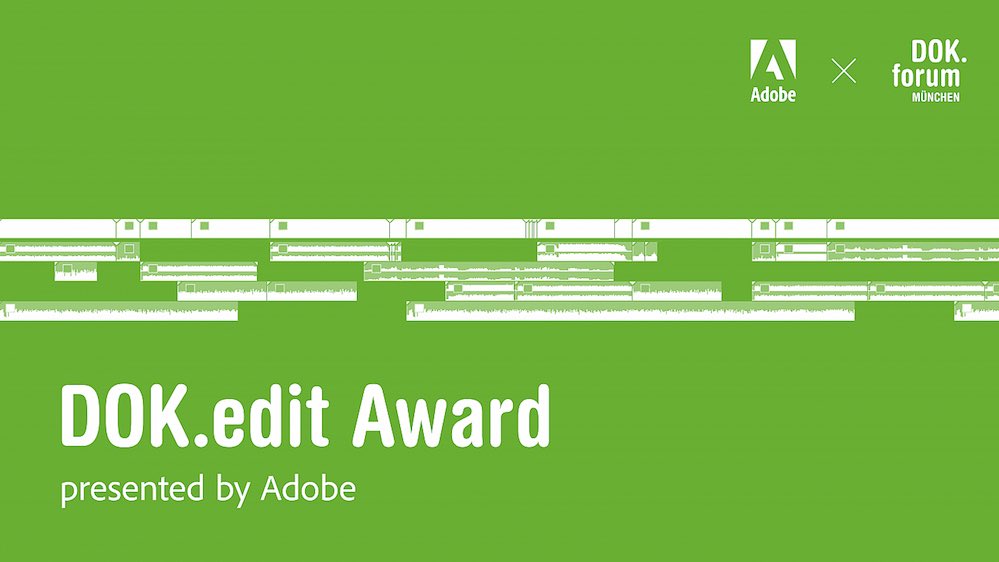 KINO.visions – The cinema of tomorrow

An event of the AG DOK about the future of cinema view online here.

Documentary Film as Cultural Practice in the Digital Age? In these Input Talks the future of documentary film as a cultural practice in the digital age will be discussed. Questions about the role of politics, funding structures and festivals in rethinking cinema culture are posed and attempted to be answered. 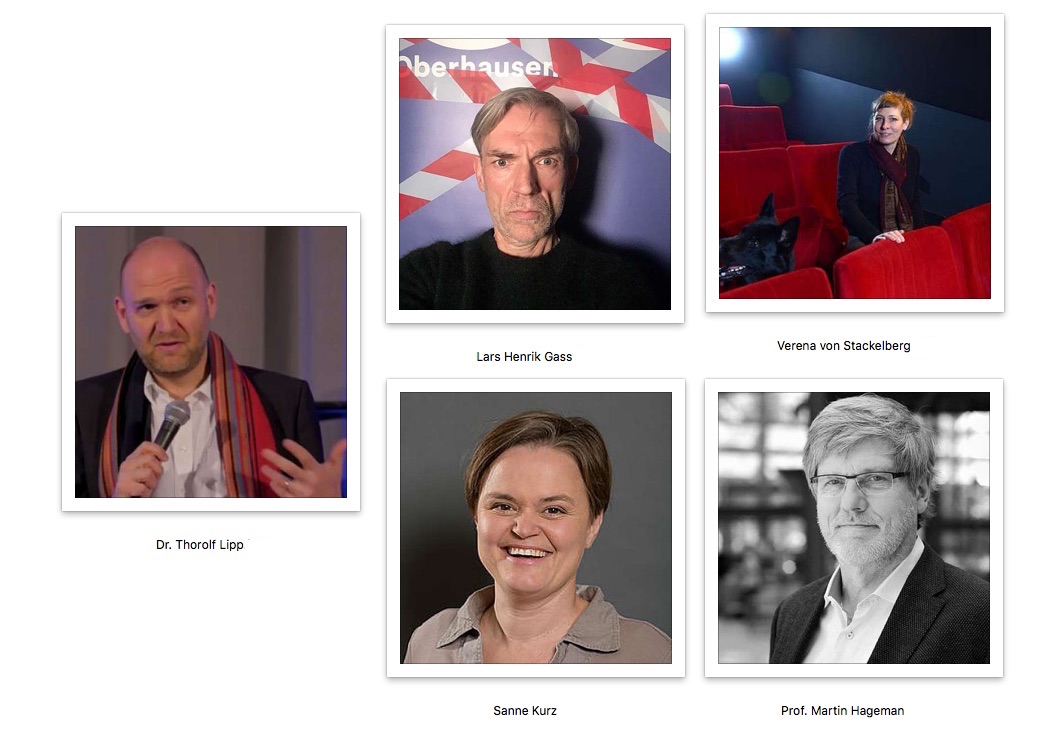 The event will be held in German. For more information, please switch to German page. To take part in this event, please log into your account and register. All information about registration for events can be found here.

In times of crisis nothing is more important than solidarity and exchange. Support the festival now with your membership in the DOK.fest München Circle of Friends and become part of our network! Join now!