Planning in view of the Corona crisis 35 DOK.fest Munich, May 6–17, 2020
In view of current developments and the ban on major events until 19 April 2020, we are examining all the conditions for holding our festival from 6 to 17 May 2020. The DOK.fest Munich team is currently continuing to work on the planning and organisation of this year's festival. At the same time, we are of course monitoring further developments and are in contact with the responsible authorities and our partners. In the event that no major events can take place in May, we are working on a plan B. We will keep you up to date. 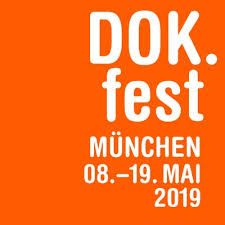 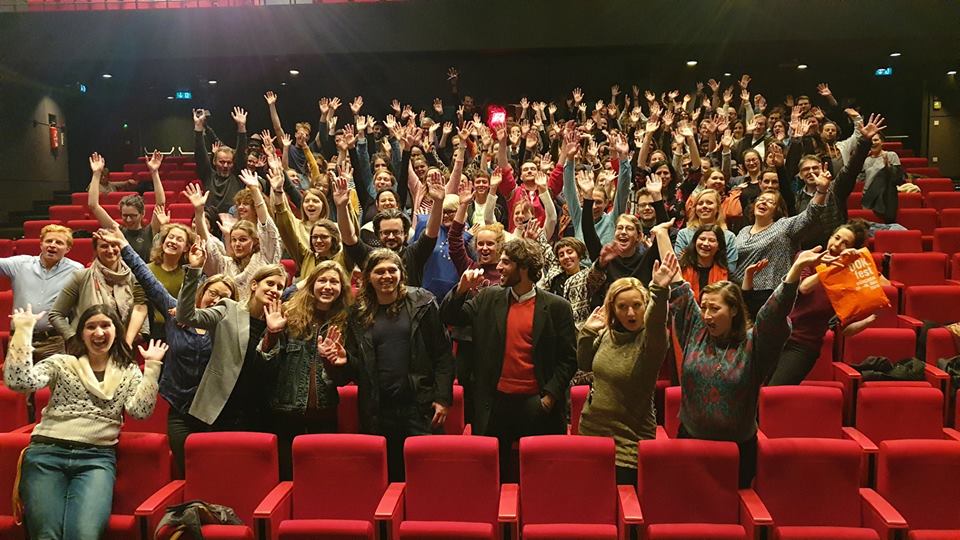 The 34th edition of DOK.fest Munich presents 159 films from 51 countries at 20 venues in the city, categorised in 12 sections. Such as DOK.international, the international competition of the festival. 13 documentaries compete for the VIKTOR Main Competition, worth 10,000 EUR. DOK.horizonte with films about countries undergoing transition, nominated for the VIKTOR DOK.horizonte. DOK.panorama shows innovative productions from all over the world mapping the diversity and current trends of documentary storytelling. 24 of the 36 films are premieres, discoveries that have not been seen on German screens. DOK.deutsch — documentaries with people and events in German speaking countries. Student Award — the student competition of DOK.fest Munich presents outstanding documentary films by students of German-speaking film schools, nominated for the Megaherz Student Award. DOK.focus humaNature with films tracing the connection betweenman and nature. Munich Premieres with documentaries by directors or producers based in Munich.  DOK.network Africa filmmakers and audiences from Germany and African countries meet on eye-level: the role of documentary films, filmmaking and perceptions of each other are on the agenda. DOK.4teens [DOK.education] with documentaries recommended for people from the age of 14. DOK.special works together with cultural and social institutions and the media industry, with films about particular events and topics at often unusual places in the heart of Munich. BEST OF FESTS with a total number of 21 films that have already been shown and awarded at international festivals. Nine of them are German premieres. DOK.guest Russia with six documentaries answering the question "What is people’s everyday life like in the vast country from the Polar Sea to China and its diverse ethnicities?" 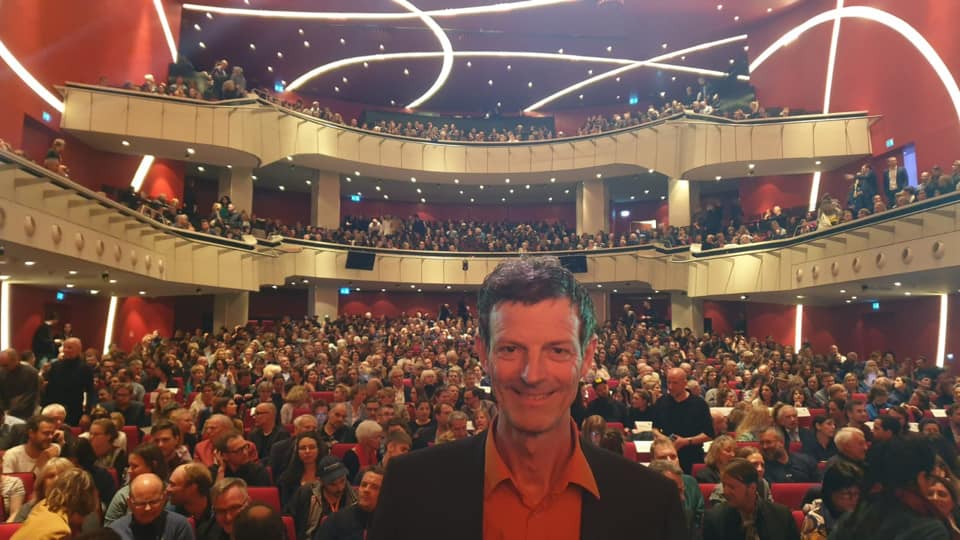 GANZ GROSSES KINO — CINEMA AT IT'S BEST with four German documentary productions and co-productions premiering in the Deutsche Theater:

German Documentary Film Music Award 2019 goes to Jana Irmert for her work with STRESS by Florian Baron. "The special way in which Jana Irmert combines composition and film not only reflects the destructive tension and the permanent psychological state of alarm of the severely traumatised young war veterans, but also creates an important space for the sound of the words that characterises the content, thus creating an echo chamber for the audience's thoughts and feelings. In her soundtrack to STRESS, the composer dissolves the boundaries between sound design and musical composition in a virtuoso and at the same time self-evident way, thus creating a sound cosmos that, through uncompromising reduction, generates brutal knowledge." according to the jury. 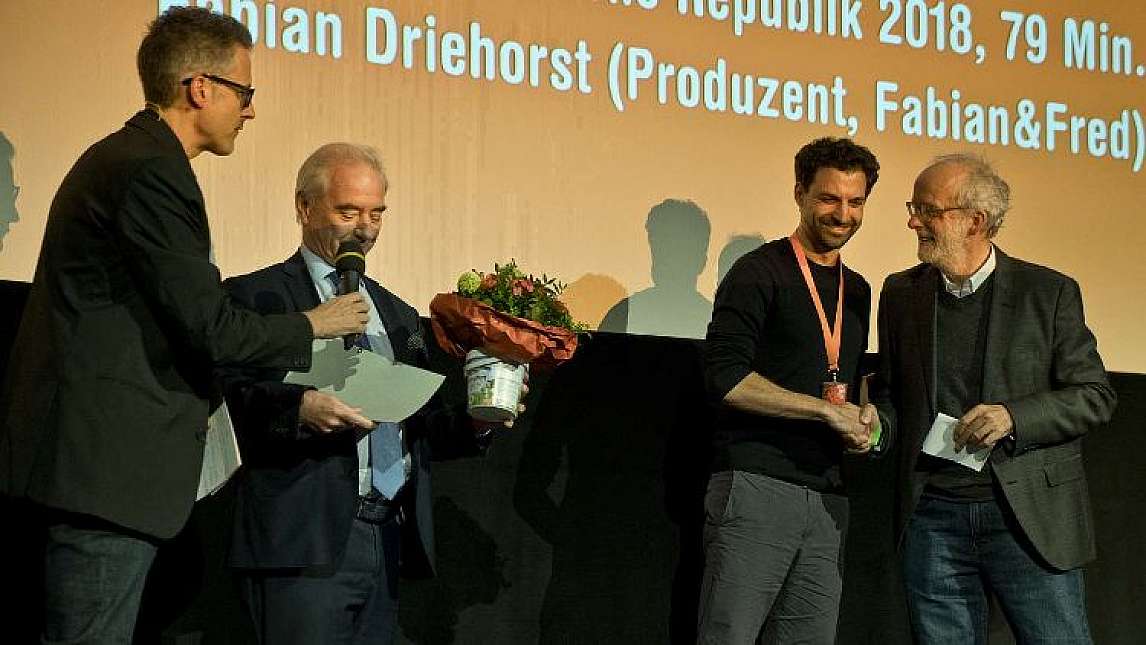 VFF Documentary Film Production Award 2019 goes to Fabian Driehorst - Fabian&Fred GmbH - producer of BOY OF WAR by Cyprien Clément-Delmas and Igor Kosenko.
'The film consistently pursues a difficult topic: a young man from the Ukraine dedicates his life to the fascination of war and wants nothing more than to finally move to the real battlefield. Directors and producers encounter this life plan without prejudice and curiously. The company works without smoke and mirrors. Not only do they run full financial risk, they also accept to shoot in dangerous war and crisis scenes. With this award we reward the high commitment of the producer, his firm belief in this mysterious material in which war becomes a cult, and his great willingness to take risks' according to the jury. Members of the jury are Birgit Schulz (CEO of BILDERSTURM Filmprod. GmBH and last year winner), Prof. Ulrich Limmer (Collina Filmrod. GmbH & HFF Munich) and Thomas Frickel (AG DOK chairman).

FairFilmAward Non-Fiction 2019  is presented by the members of Crew United with the support of numerous industry associations, including the FVSW Filmverband Südwest and honors production companies offering particularly fair working conditions.
The winner are Andrea Haas-Blenske, Volker Schmidt-Sondermann, CEO's of the production company Ifage Filmproduktion GmbH and the two other nominies have been Flare Film GmbH as well as
Bilderfest Factual Entertainment.

DOK.fest Award of the SOS-Kinderdörfer weltweit 2019  Focus on young life worlds - the DOK.fest Award of the SOS Children's Villages worldwide honours documentary films that tell an outstanding story from the perspective of children and young people. The award is endowed with 3,000 euros. The award is sponsored by B.O.A. Videofilmkunst. Joost Vandebrug receives this award 2019 for his debut film BRUCE LEE & THE OUTLAW. He accompanied the Bucharest street boy Nicu for six years. Nicu found a home at Bruce Lees, the king of the underworld, at his underground tunnels. He gets food and something like a family. But drugs are omnipresent, like the silver Aurolac that the children constantly inhale with their plastic bags.
The nominated german documentaries have been BEFORE FATHER GETS BACK by Mari Gulbiani. In a Georgian village from which many men have left for Syria, two girls escape the common longing for their fathers through the magic of cinema. GODS OF MOLENBEEK by Reetta Huhtanen. The friends Amine and Aatos live in the same house. Their universe is about spiders, the search for God and one day about terror, which changes life in their district Molenbeek. A contemporary childhood study far removed from all clichés. ISIS, TOMORROW. The Lost Souls of Mosul by Francesca Mannocchi, Alessio RomenziISIS may have lost the war, but the simple act of surrender cannot erase the deadly ideology. What happens to the youngest losers (and their mothers) who have no memory of a world before ISIS?.   Click for all of the nominees here.

VIKTOR Main Competition DOK.international goes to
DER NACKTE KÖNIG – 18 FRAGMENTE ÜBER REVOLUTION | REVOLUTION REVISITED by Andreas Hoessli, 107min, Polen/Switzerland/Germany [DOK.international] "We recognize a precise psychological portrait of a perpetually shattering world. As this essay moves across time, it transcends the power of record and documentation alone, to survey the remains of revolution, in conversation with romanticism and limitation." Sponsored by Bayerischer Rundfunk and Global Screen, worth 10,000 Euros

FFF Bayern Documentary Talent Award goes to CONGO CALLING by Stephan Hilpert, 90min, Germany [Münchner Premieren]
"Stephan Hilpert's CONGO CALLING tells the story of the dilemma of European development aid and its failure, both large and small, in a reserved and yet very close way. The fact that this cinematic balancing act succeeds is not least due to the unobtrusive and at the same time precise camera, which takes the viewer on a journey into the politically restless heart of Africa."
Sponsored by FilmFernsehFonds Bayern, worth 5,000 Euros, for upcoming Bavarian directors

VIKTOR DOK.horizonte goes to ESTA TODO BIEN - IT'S ALL GOOD by Tuki Jencquel, 70min, [DOK.horizonte]
"In his cleverly constructed documentary film Tuki Jencquel recounts how the people in Venezuela are suffering from a shortage of medicines and a real exodus of doctors who are migrating abroad. Patients for whom the lack of medicinal supplies amounts to a death sentence; young doctors who have decided to stay against the odds; and despairing pharmacists whose shops stand empty are used as examples by the director to reveal what is seldom shown in news coverage on the subject."
Sponsored by Petra-Kelly-Stiftung, worth 3,000 Euros

megaherz Student Award goes to
IN SEARCH... by Beryl Magoko, 90min, [megaherz student award]
"IN SEARCH ... is personal research and political act at the same time, told in a humorous and touching way, without ever being judgmental or dogmatic. It is a difficult subject, not captivating by its dramatization, but precisely by the opposite. Here, film aesthetics and concept step into the background in favour of the director's immediate gaze, thereby creating a space for the incomprehensible yet deeply human"
Sponsored by megaherz, worth 3,000 Euros 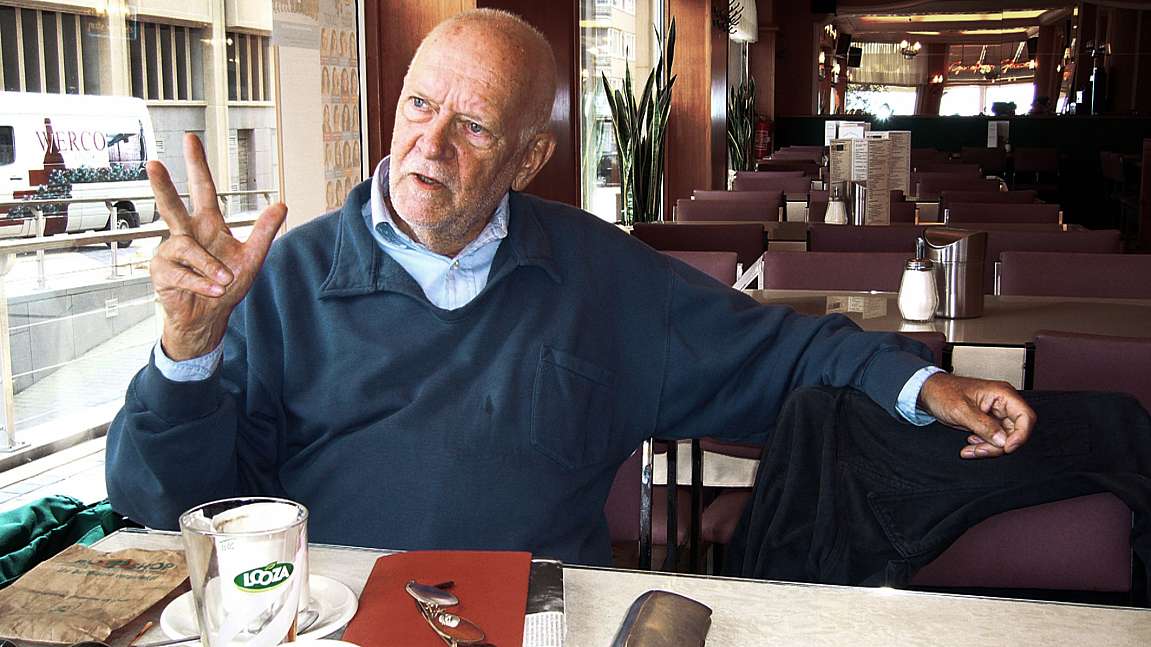 DOK.special in memoriam  This year we mourn the death of four pioneers of European documentary film who have shaped the style of entire generations. Four great names closely interwoven with the history of the 20th century: Agnès Varda, Marceline Joridan-Ivens, Claude Lanzmann and Klaus Wildenhahn,  founding member of AG DOK.

AG DOK Brunch in the back yard of Hansa-Haus, Brienner Straße 39, starts 11o'clock on Sunday, May 12, 2019. Visitors of DOK.fest Munich wellcome. 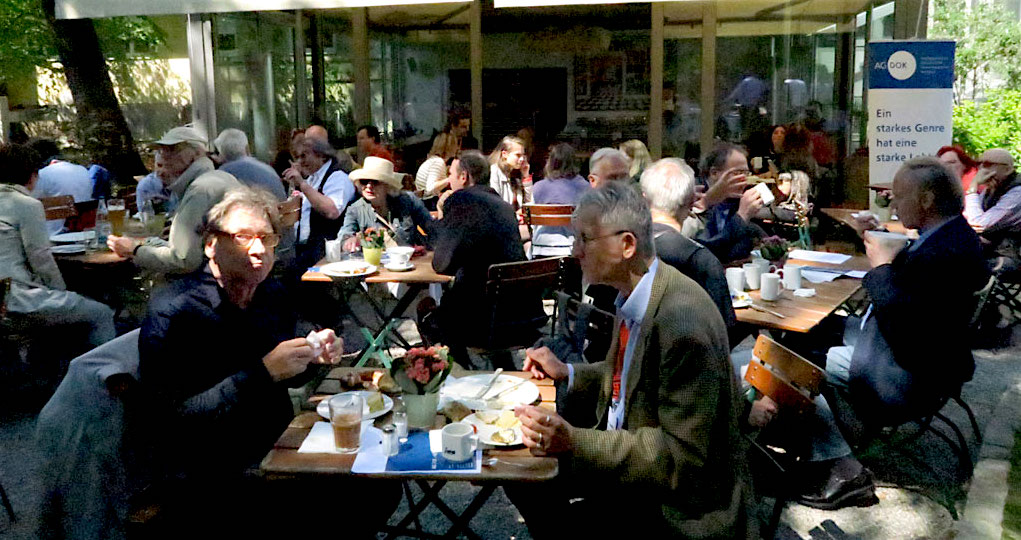 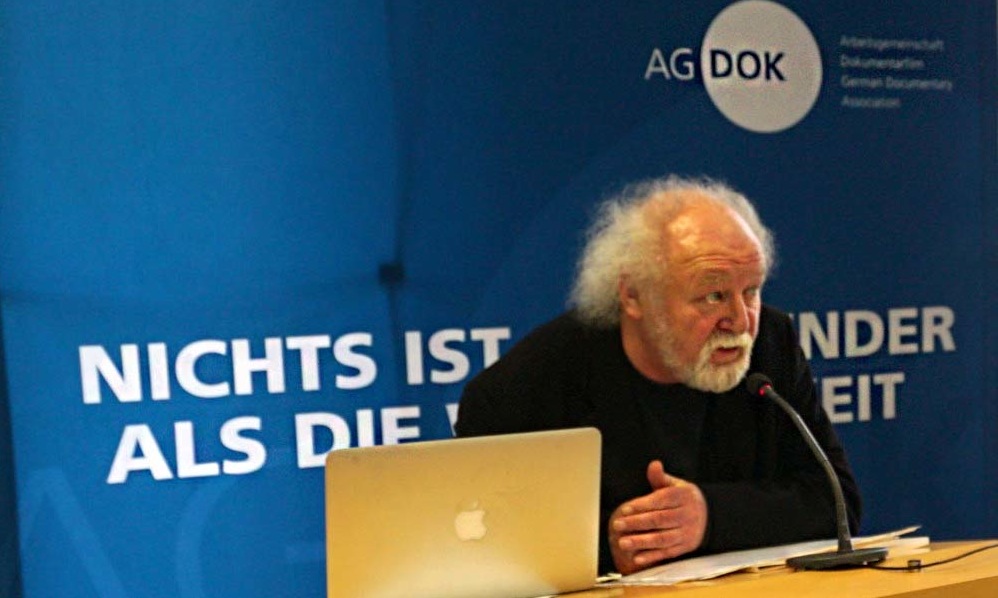 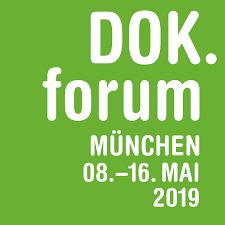 Oragnizing this event ProQuote Film, AG DOK and BVR will give participating female filmmakers the opportunity to get to know other trades and form new networks as part of DOK.forum Perspektiven at the 34 DOK.fest Munich. Editors are invited to introduce their fields of work and to get to know filmmakers and their projects at 12-minute one-on-ones. After the event, the DOK.forum Lounge will offer the opportunity to deepen one or two new acquaintanceships. 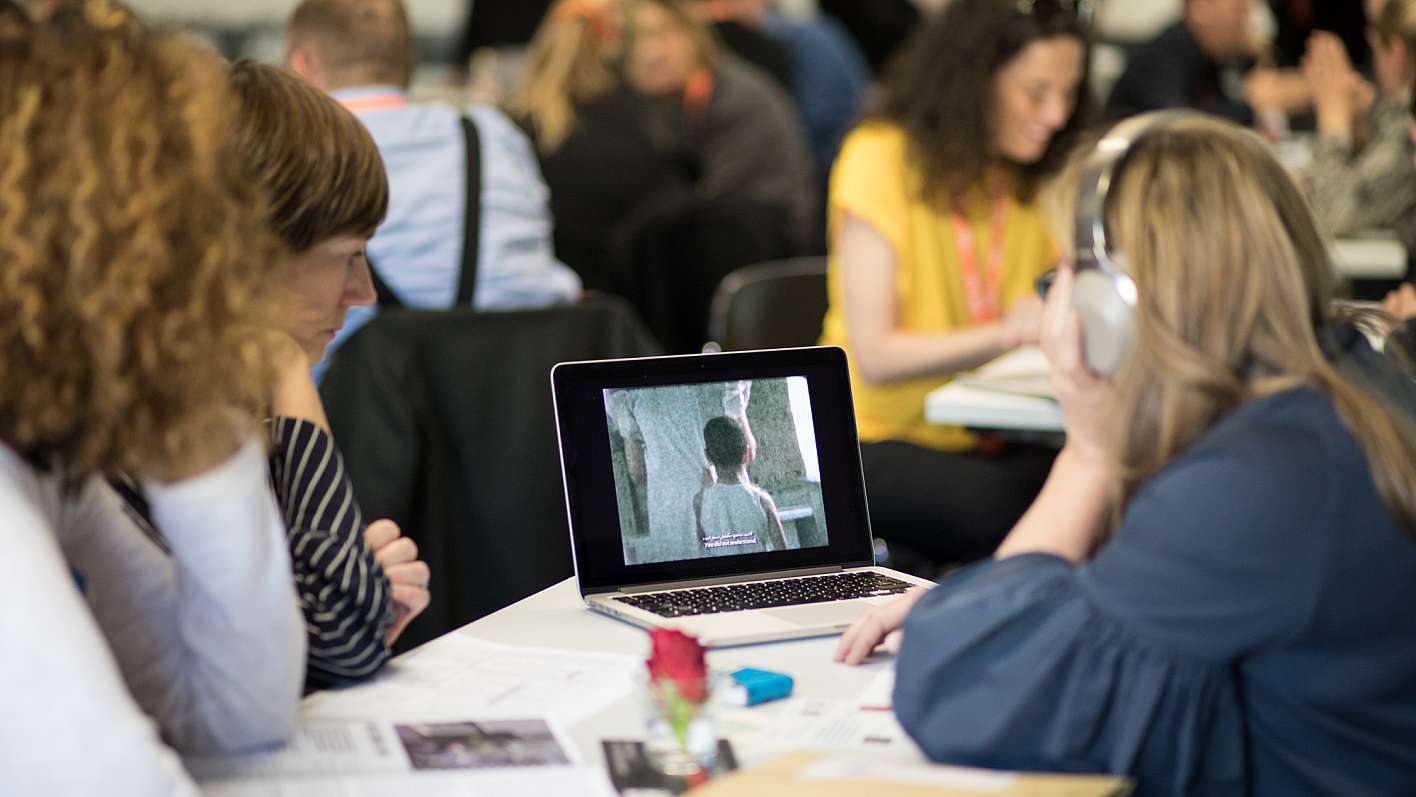 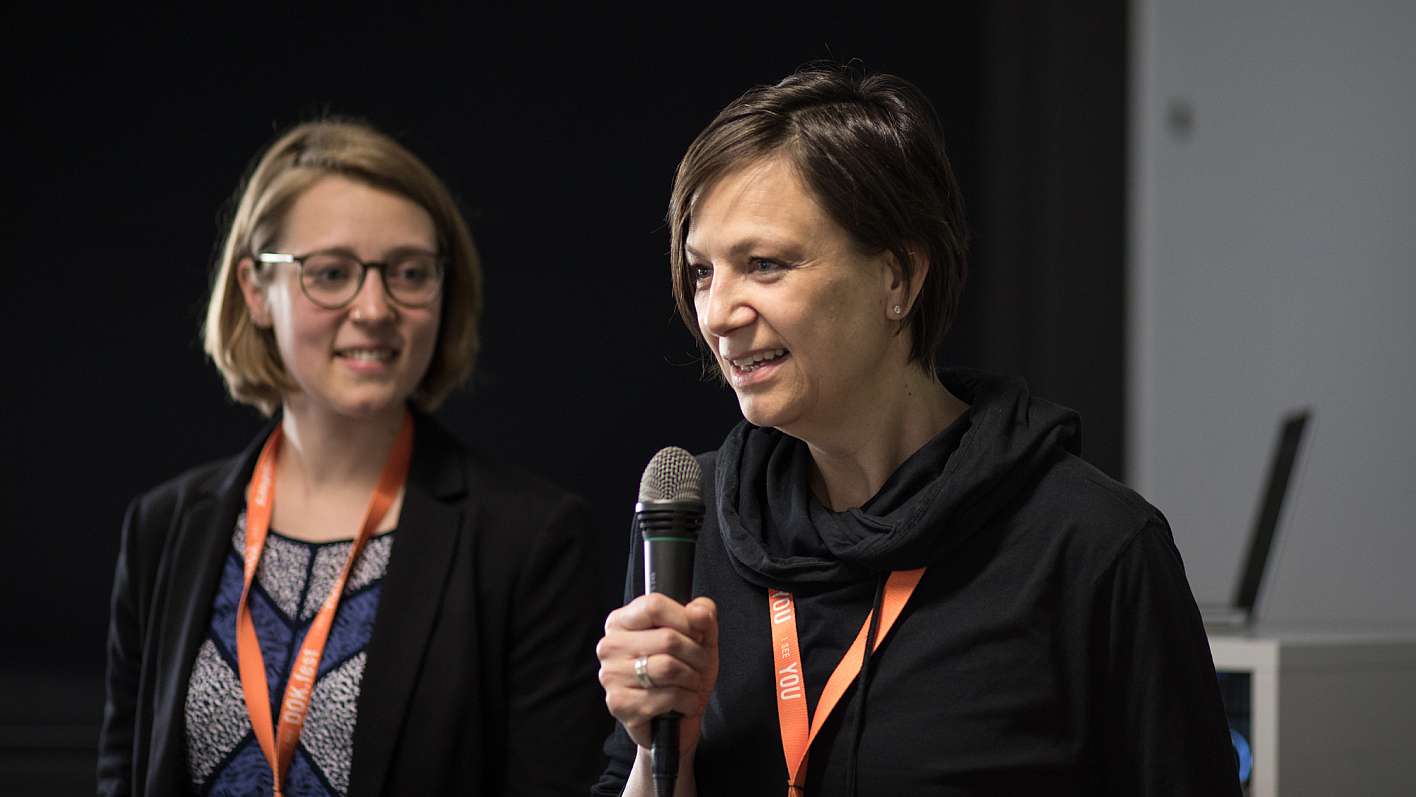 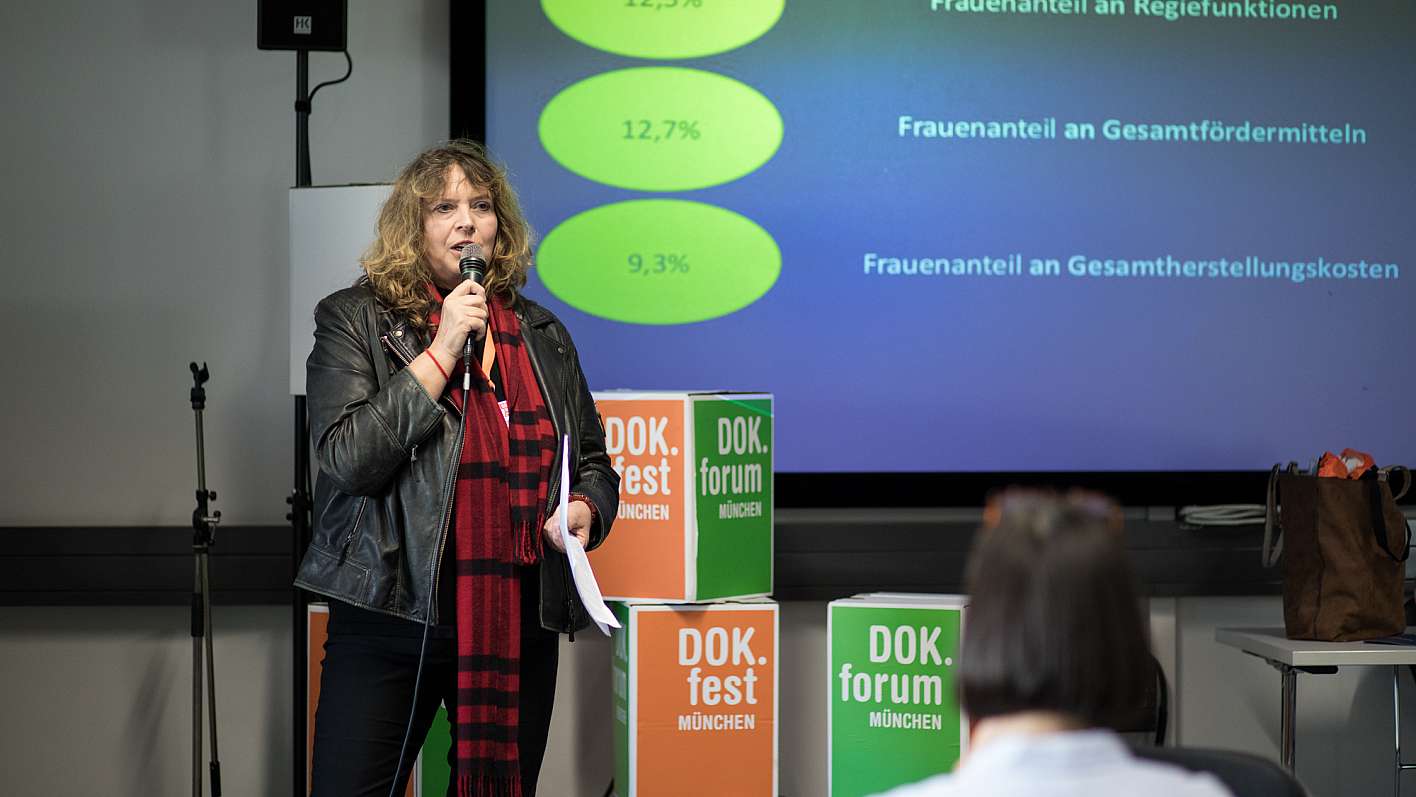 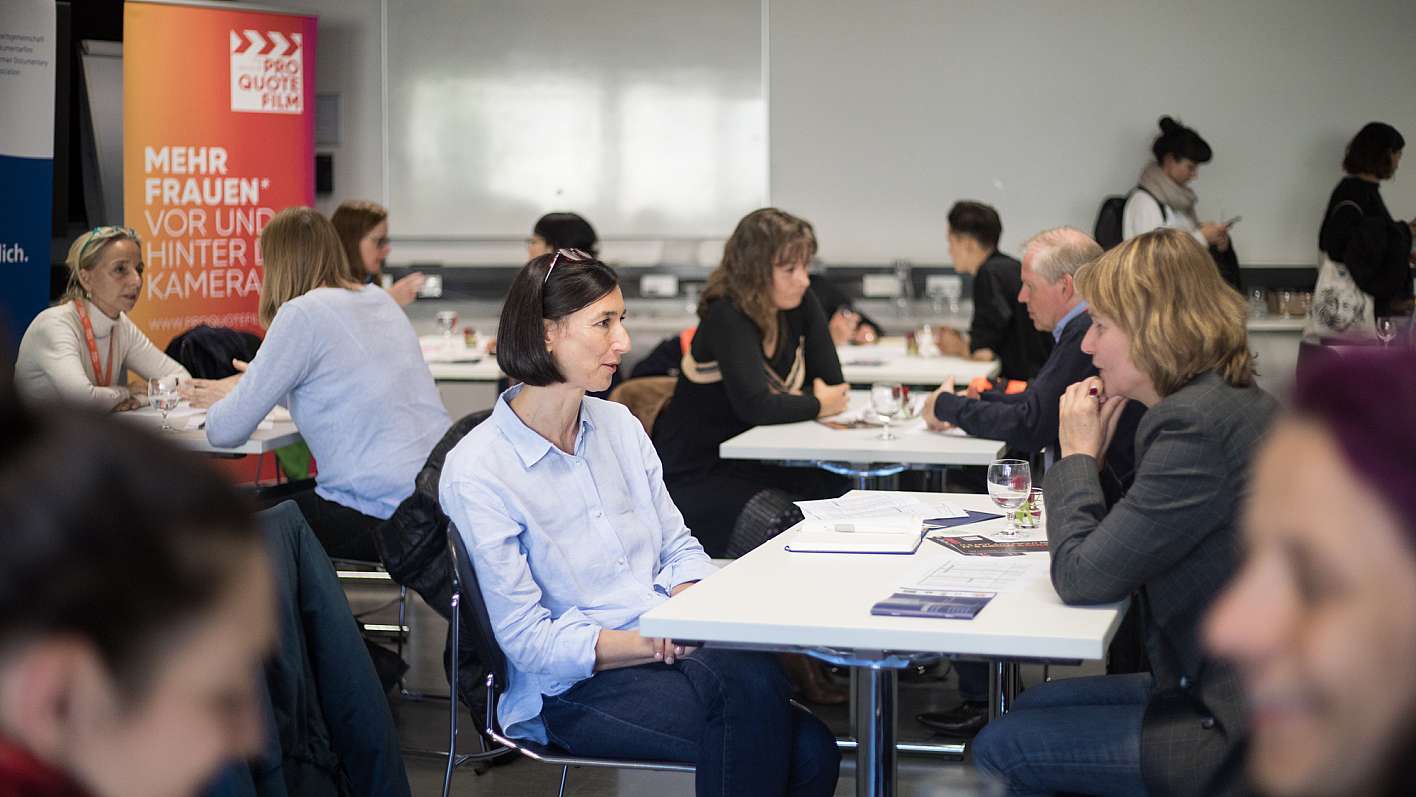 DOK.forum Marketplace May 9—11, 2019  at HFF MUNICH
The most exciting concepts for documentary film, film composition, series, webdoc, VR and interactive media. The DOK.forum Marketplace uses targeted matchmaking to bring projects in the development stage together with producers, commissioning editors and distributors - in competition for awards and grants. 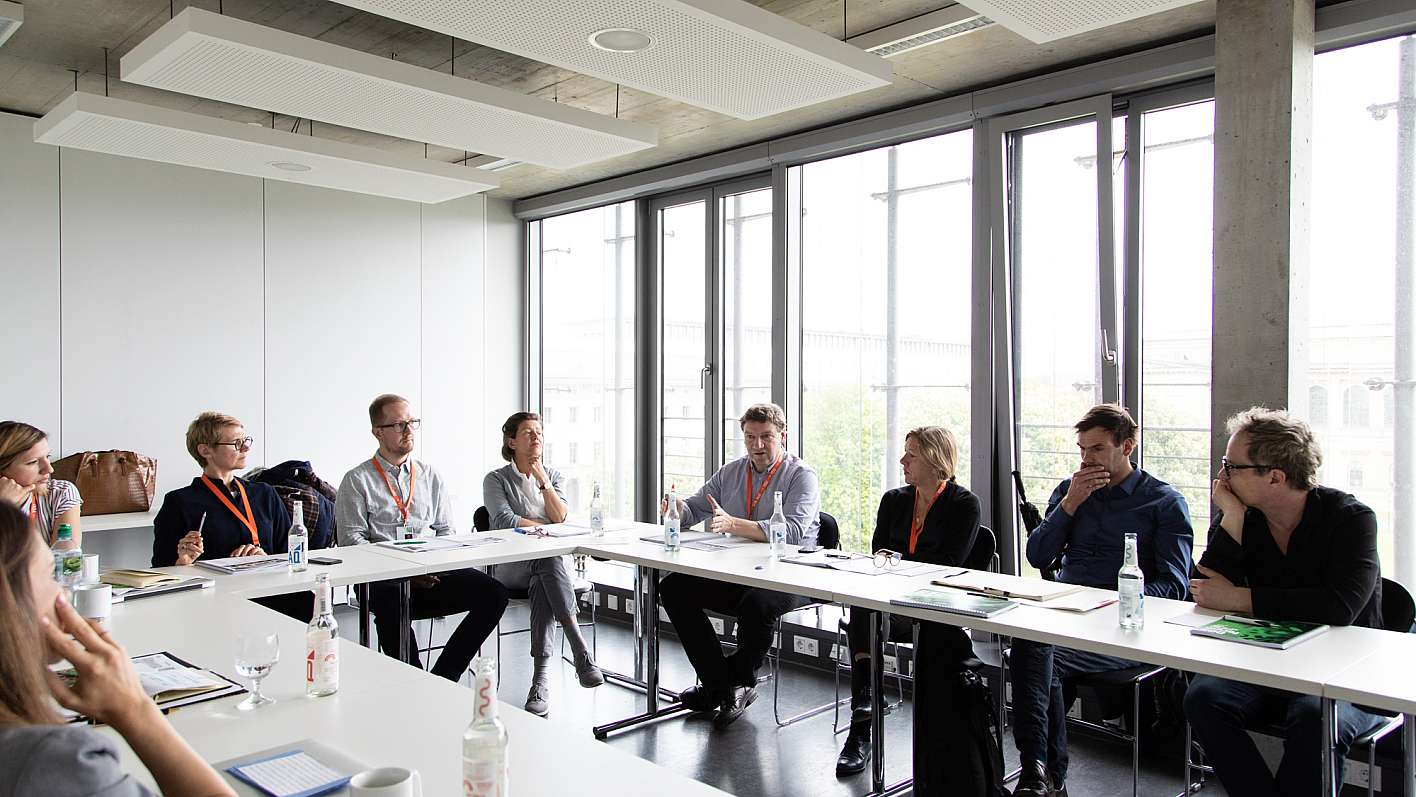 • EXTENDED ONE-to-ONE To complement the discussions in the roundtables and after the pitchings, the DOK.forum Marketplace offers carefully curated One-to-One Meetings of 15 minutes each. The meetings will be arranged in advance and during the marketplace upon request of the decision makers.

• MARKETPLACE SCREENINGS Up to 10 projects in rough cut will be presented in a closed screening buyers, distributors, sales agents and festival curators.

•• This year's German Composition Funding Award goes to Max Gausepohl for the composition project for MAU KE MANA - OR: WHERE ARE YOU GOING? directed by Max Sänger. 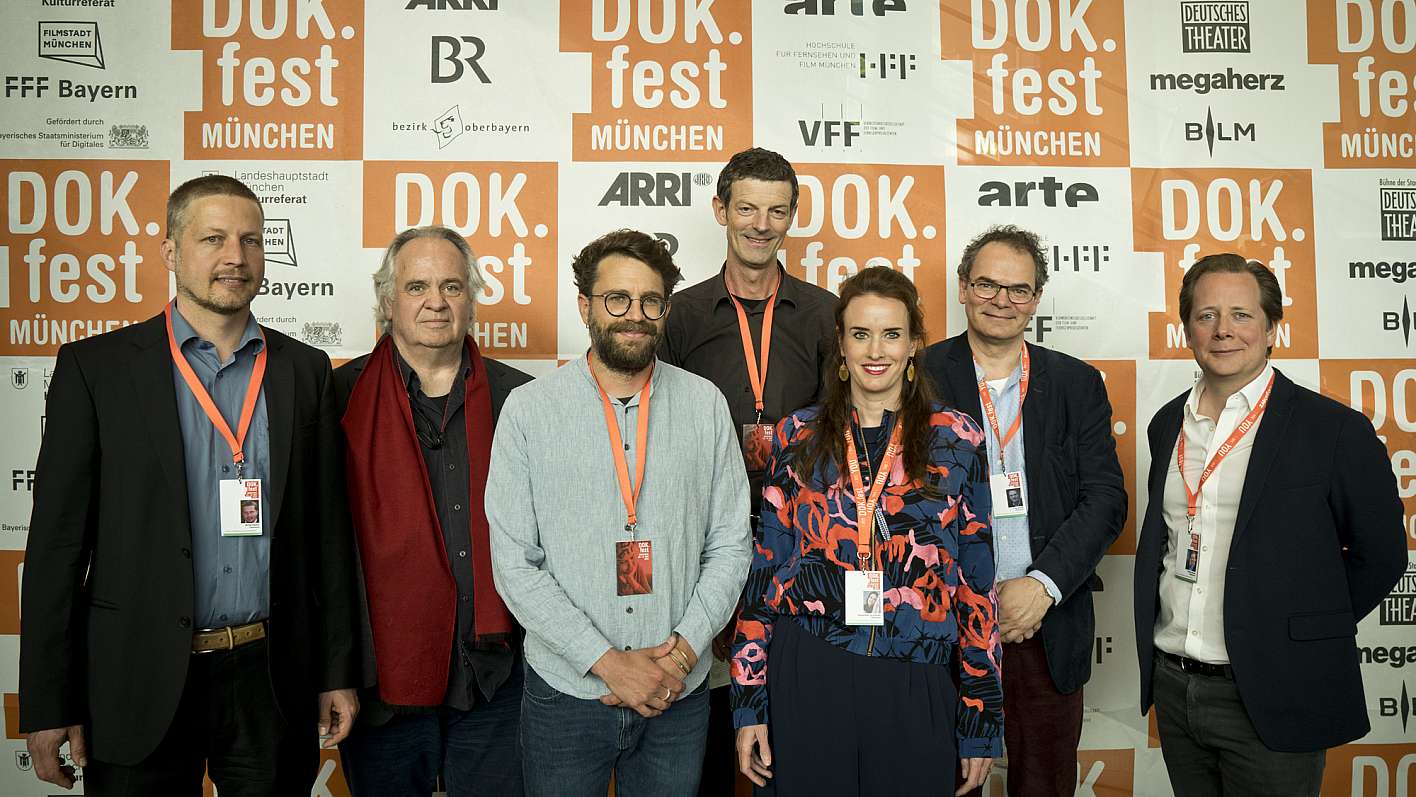 • ALL DIGITAL?—THE DOCUMENTARY SLAM Pitching for the future of filmmaking Digitalization is rapidly changing the film industry. Conventional strategies of the industry are challenged in all areas of filmmaking - from development, financing and production to distribution: no one can escape digital change. In order to actively shape this development, we must see it as an opportunity for our industry.
With the Documentary Slam ALL DIGITAL? we provide a platform for ideas that put the potential of digitization to good use for the film industry in a creative and courageous way. We offer film professionals the opportunity to present their concepts, impulses, practical reports and experiments to a broad industry audience at the 34th DOK.fest Munich.
DIGITISATION ALL OVER? DER DOCUMENTARY SLAM will take place on 9 May 2019 at the HFF Munich as part of the DOK.forum, the industry platform of the DOK.fest Munich. The participants will each have 10 minutes to present their ideas. Afterwards there will be an opportunity for questions from the moderator and the audience. CALL FOR CONCEPTS ended April 1, 2019. 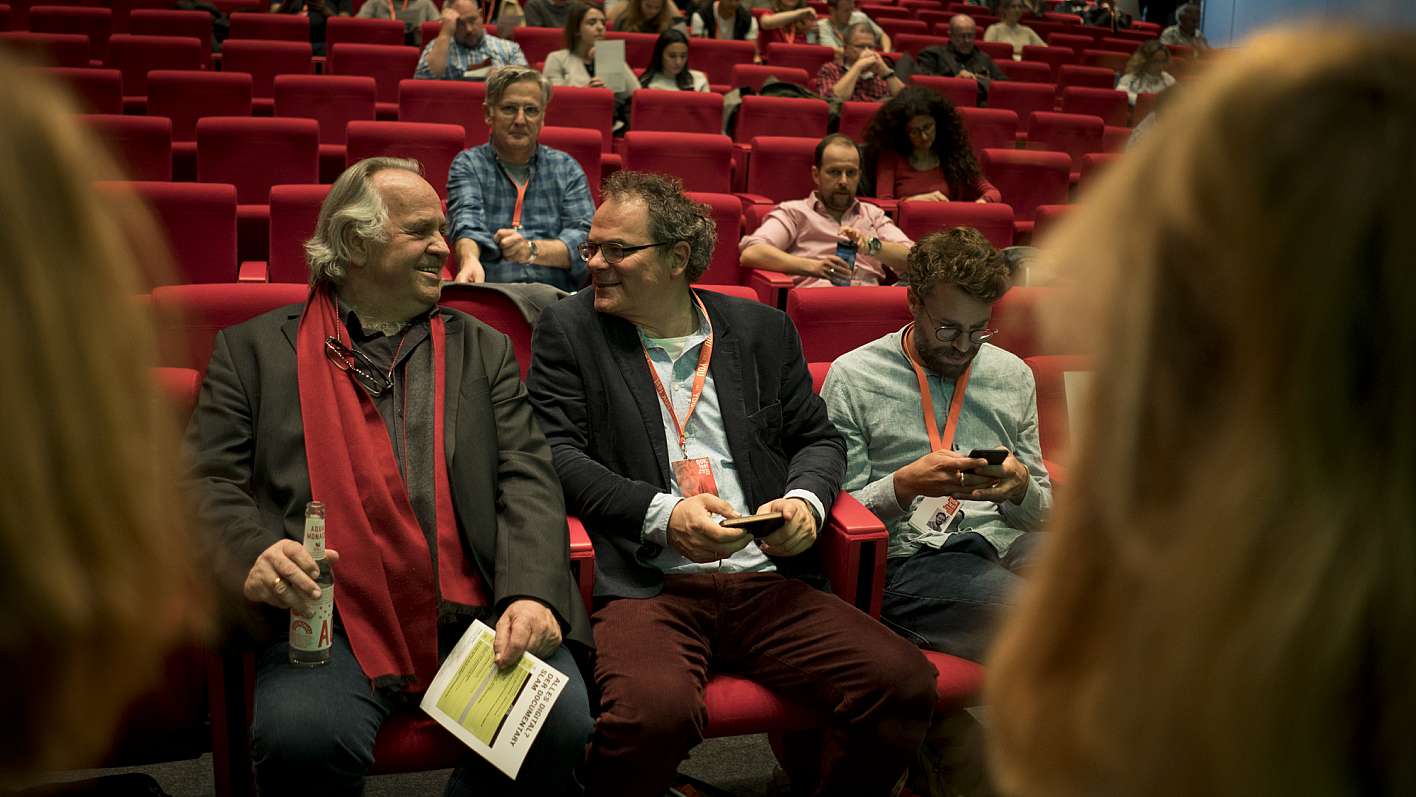