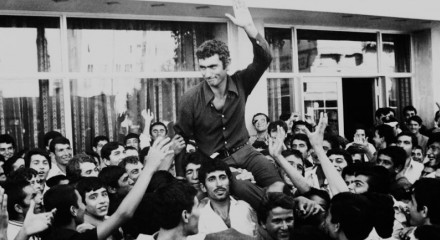 They called him The Ugly King!...

mîtosfilm is an independent Berlin-based production company which aims to support authentic storytelling, producing thought-provoking feature and documentary films. Through our international co-productions, we strive to reach audiences around the world.
From 2004 to 2011 mîtosfilm released 16 arthouse films as a distributor, including TURTLES CAN FLY by Bahman Ghobadi, CLOSE TO HOME by Vidi Bilu and Dalia Hager, SÜT by Semih Kaplanoglu or MIN DÎT by Miraz Bezar for the German cinema-theatres.
Among others, we coproduced NO ONE KNOWS ABOUT PERSIAN CATS by Bahman Ghobadi (Cannes 2009: Prix Un Certain Regard), BEFORE SNOWFALL by Hisham Zaman (Goteborg 2013: Best Nordic Film) and MEMORIES ON STONE by Shawkat Amin Korki (Abu Dhabi 2014: Best Film from the Arab World).